Beyond the Pill's provider training on IUDs and implants successfully reduced unintended pregnancy among teens and young women aged 18-25 years according to a new study published in The Lancet medical journal. 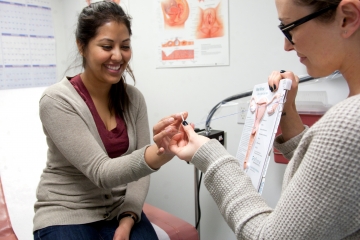 Each year, more than half of pregnancies are unintended in the US—far higher than in similar countries—despite the fact that we have the tools to prevent them. The UCSF Bixby Center’s Beyond the Pill Program developed a training curriculum that gave health care providers the skills to educate young women about the range of FDA-approved contraceptive methods, including highly effective IUDs and implants. In partnership with Planned Parenthood, we tested our curriculum in a randomized trial at 40 health centers nationwide.

Our training reduced unintended pregnancies for women seeking family planning care through better access to highly effective birth control by almost half. It also dramatically increased providers’ counseling and women’s awareness of IUDs and implants. However, women receiving contraception post-abortion did not benefit from the intervention, as less than half who chose IUDs and implants at the time of an abortion actually obtained them. Researchers noted that there are many cost barriers to contraceptives at the time of abortion in the US.

To learn more about our study, please see: